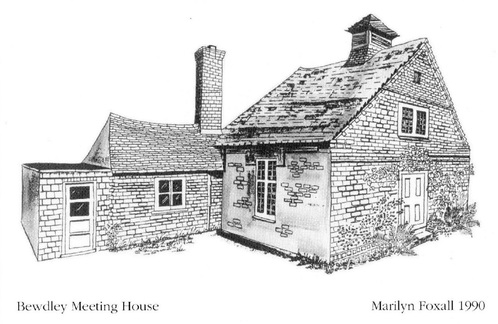 Most of the founding members of the Meeting were buried in the grounds of the Meeting House, as were several other local Quakers. The most prominent of these was Mary Darby, wife of Abraham Darby 1 of Coalbrookdale, the first man to smelt iron with coke. With the passing of the first generations of Quakers, however, the Meeting grew smaller and smaller. Indeed, the Meeting would probably not have survived at all were it not due to the Mucklow connection. In the early part of the century, the ownership of Areley Flail, Areley Kings, passed to Daniel Zachary, a descendant of William Mucklow's sister. Daniel Zachary had been a miller at Cirencester, but be moved to Areley Hall and lived there for 30 years with his invalid son, Francis. Every First Day they drove to Bewdley Meeting House, "... to sit in silence, often by themselves." By 1861, Bewdley Meeting House was described as "seldom used or only in diminished numbers" and was being supported by Friends from other meetings who had pledged to worship occasionally at Bewdley. When Daniel Zachary died in 1867 and his son in 1870, it looked as if the Meeting were doomed to extinction. Areley Hall was inherited by another Quaker relative, Zachary Lloyd, but he later left Friends and joined the Wesleyans. Like many other meeting houses, however, it was saved by the sudden arrival of new Friends who brought life back into the old building. In this instance, the new life came from Sturge and Tangye families, both of whom played a vital part in the survival of Bewdley Meeting. Joseph Sturge was a Bewdley corn merchant and maltster, as was his brother Charles. Charles Sturge, however, has another claim to fame since he was a passenger of the first train to run from Stockton to Darlington in 1825. He travelled in one of the open wagons and he and the other young men on hoard had to protect the ladies with them from the stones thrown at the train by irate farmers. These were protesting at the lass of their pack horse trade to the new railway. The Sturges moved, in time, to Birmingham, where they became wealthy philanthropists, but Charles Sturge had bought a property, high above Wribbenhall, called the Summer House. This had been built by Benjamin Cotterell, but the Cotterell family had, by now, moved to Bristol. The Sturges used the Summer House at weekends and this led to an influx of visitors to Bewdley Meeting. These included the famous radical M.P. and Quaker, John Bright, who worshipped at Bewdley Meeting House on three occasions. Charles Sturge has been described as "the mainstay of the Meeting" even though he did not minister. This title was given to him by Alice Tangye, the daughter of Joseph Tangye, a Cornish engineer and Inventor, who had made a considerable fortune out of his engineering works in Birmingham.

Joseph Tangye had bought Tickenhill Manor in 1873 and once he had moved to Bewdley, he became a prominent figure in Bewdley local affairs. He was the mainstay of a campaign to bring fresh water to Bewdley, spurred on by the sight of the poor women in Lax Lane who had to fetch their water in buckets every day from the park pool and two stagnant wells on Wyre Hill. On washing day this meant 18 journeys before the washing could be done. It is Alice Tangye, however, who was now to be the mainstay of the Meeting from the 1890s to her death at the age of 87 in 1960. Not only did she keep the Meeting going in its darkest post-way days, but she also assembled and recorded much of its history. She has also left us a fascinating picture of the Meeting in the 1890s by recording the lay-out of the Meeting and providing cameo sketches of each of the members and attenders. Apart from the Sturges and the Tangyes, these included Friends of more humble origin as well as Friends who were rich. There was, for example, William Helliwell, a Kidderminster carpet weaver, whose, "natural history allusions appealed to children" and a Mr and Mrs Lowe, nonconformists, who later joined the Salvation Army, because they did not think Friends lived up to their principles. There was also Tom Pitt, an old besom maker, "who held forth at great length in meeting and frequently had to be eldered." Another attender was William Joyce, an old infirm merchant sailor who had once been shipwrecked and found frozen to a buoy. The majority of the meeting, however, were prosperous Victorians and these included George Barker, an ex-mayor of Birmingham. George Barker built his gothic-style country house at Beaucastle, on the outskirts of Bewdley and, as a Victorian Quaker, did not believe that his married and bachelor friends should mingle. He had the house so designed that some bedrooms could only be reached by outside stairs, thus preventing his two, types of friends from meeting. Despite the fact that another friend, Weston Binns, was given a house and income to live in Bewdley and help the Meeting, most of the young people associated with Bewdley Meeting left the district. The only one to remain was Alice Tangye, who, in time, married Frederick Parker. She eventually inherited Tickenhill Manor and lived there until her death. 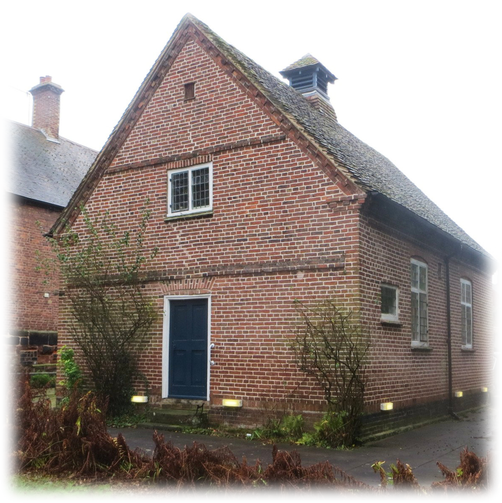